Our Nazca Lines Scenic Flight from Pisco Airport includes the most popular geoglyphs of the Peruvian desert.
On this aerial tour, you will see the best drawings of Nazca, as well as those etched in the Palpa region.
Among the figures, you will find a perfect representation of a monkey, a dog, a whale, and other animals.
Also, you will see various types of bird figures, including a hummingbird, a heron, a condor, and a parrot.
Likewise, you will appreciate gigantic geometric shapes and hundreds of straight lines.
Additionally, we will see the amazing human designs of Palpa, which dates back to 200 BC.

Part I: Leaving from Pisco Airport.

At the designated time, you will be picked up from your hotel in Paracas.
Immediately after that, you will be transfered to the Pisco airport, located nearby.
Upon arrival you will receive information about the dynamics of the air tour.
Unlike the small aircrafts at the Nazca airport, here in Pisco we use a Cessna Caravan plane. 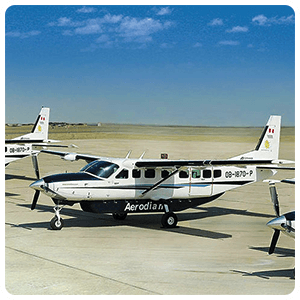 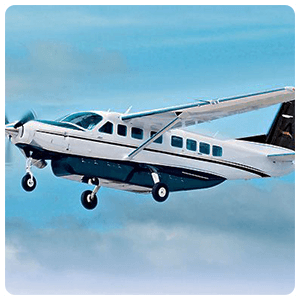 The Cessna Caravan plane has capacity to carry up to 12 passengers, each one with a window seat.
Before takeoff, our pilot will give each participant a map of the Nazca desert.
This map indicates the circuit to follow, and will allow you to locate the figures on the ground.
After flying over the desert of Pisco and Ica, we will arrive at the mysterious desert of Nazca.

Part II: Over the Nazca Plateau.

In order to start with the flight circuit, we must start from the figure of the whale.
Once near the zone of the whale figure, the pilot will start to fly in circle over it.
Here you will catch a glance of the whale, etched perfectly inside a huge rectangle. 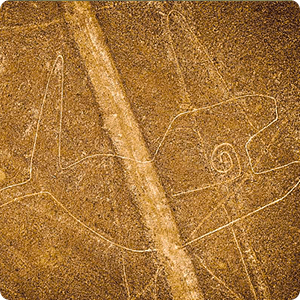 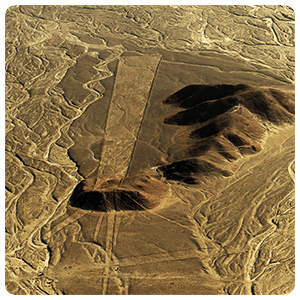 This marine creature measures about 65 meters in length, and symbolize water.
After that we continue to west where will see huge tringle forms, some of them over 2 km long.
According to the Swiss writer Erick von Daniken these shapes were made by aliens.
He belives these shapes are the result of landings of extraterrestrial ships.
Nearby, we can see also a small hill with a triangle figure on it, with 3 emergin lines.
Later on we will reach the Pampas of Jumana, a zone with the greatest proliferation of figures.

Part III: Over the Pampa of Jumana.

Flying during the Jumana desert, we will find a great number of drawings.
Here stands out the mysterious Owl-man, also known as the Astronaut. 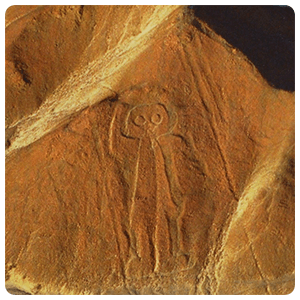 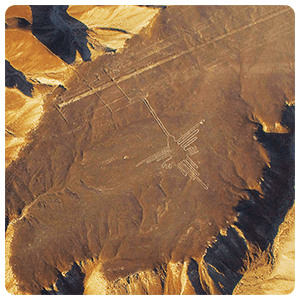 This drawing represents a human being, with a big head and rounded eyes.
Unlike the other geoglyphs, the olw-man was etched on a hillside and not on the flat ground.
The Owl-man is 35 metres high, and its construction is attributed to the Paracas Culture.
Further west, we will find a figure of a fox and a huge monkey, carefully laid out.
On one corner of the Pampas of Jumana, we will find the Hummingbird. 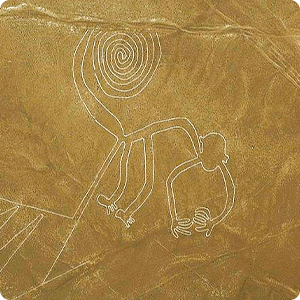 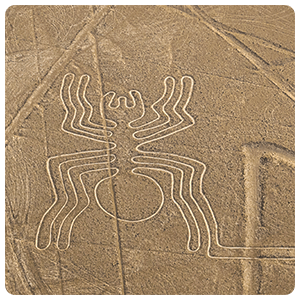 This bird is perhaps the most attractive of all, and also the best preserved.
Some kilometres away is located the figure of the Spider, which was discovered in 1946.
Nearby, we can find a big Condor, which measures around 120 metres in length.
Later on we will fly over the Pampas of San Jose, near the Ingenio Valley.

Part IV: Over the Pampa of San Jose.

The Pampa of San Jose shelters an amazing group of geoglyphs.
Among them, we can spot a heron, a large geoglyph as long as 3 soccer fields.
There is also a parrot figure, which head and beak are clearly visible from the air.
On one side of the Panamerican Highway are located the figures of the hands and the tree. 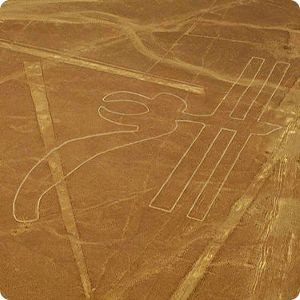 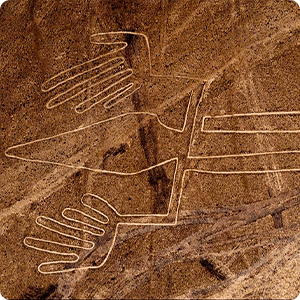 A few metres away we will find a large figure of a Lizar, which measures around 180 m.
Unfortunately, when authorities built the highway on this zone long ago, they almost destroyed the Lizard.
Nevertheless, his entire form can still be seen from above.
Afterwards, we will fly over the Ingenio Valley and head to the Palpa region.

Part V: Over the Palpa Desert.

The desert of palpa has a large number of geoglyphs, most of them human figures.
Scholars believe the geoglyphs of Palpa are much older than those found in the Nazca region.
Most the figures etched in Palpa are attributed to the Paracas people, who thrived around 500 BC. 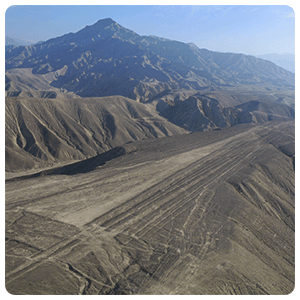 Unlike the drawings of Nazca, in Palpa most the human representations are found on hillsides.
During the flight we will see a group of human beings known as the Royal Family.
On the other hand, we will also see enormous trapezoids built onto the flat mountains of Palpa.
After having seen all the geoglyphs in the Palpa area, we will return to the Pisco airport.

End of the flight.

WHAT IS NOT INCLUDED?

IMPORTANT:
For safety reasons, the airlines that operate the Nazca Lines flights have a weight limit per seat.
The weight limit is 200 pounds (95 kilograms) per passenger.
If a passenger exceeds this limit, then the passenger will need to pay an extra fee for another seat.

Contact us via WhatsApp to confirm the availability of the tour you wish.
Once availability is confirmed, please send us an email or WhatsApp with the following information:

Proceed with your payment online through our web.
Finally, receive confirmation via e-mail or WhatsApp.

IMPORTANT: Bring your original passport on the date of your Nazca flight. (Not photocopy)

Change of Tour Date:
You can change the date of your flight to 72 hours without any charge.

Cancellations:
If you cancel your tour 48 hours or earlier before the tour begins, we will charge only an administration fee of 10%.

Cancellation due to Weather Conditions:
In the event of bad weather conditions, your flight will be re-arranged for a later time or the next day.
If by reasons beyond your control, you can not wait, then your booking will be canceled and a charge of 20% will be applied.

Solo traveler?
No problem at all, as there is no minimum number of passengers for this aerial tour.
Solo travelers, couples, and small groups of travelers join other passengers on the plane.

How do I get to the Nazca Lines?
First of all, you need to travel to the city of Nazca, located some 7 hours by bus from Lima.
Once in Nazca, there are two options to see the lines.

The first and cheapest option is to visit the lines by land, visiting the Nazca Metallic Tower.
The tower is located in the Nazca desert, approximately 20 km away from the city.
From the top of the Mirador, you can 3 figures, as well as large geometric forms and lines.

The second option is to take a flight over the Nazca Lines, which is by far the best experience.

Is it worth flying over the Nazca Lines?
Yes, it is worth it, as by visiting the Nazca Lines you will be adding to your travel memories a cultural heritage site.
The Nazca Lines are a must-visit in Peru, one of the best highlights in the land of the Incas.

Can you see the Nazca Lines without flying?
The answer is yes, there are actually many sites from where it is possible to see some drawings.
The zone of Palpa, some 45 km away from Nazca contains various lookout points to observe the lines.

East of Nazca, there is a zone known as Cantalloc, from where it is also possible to spot various lines.
You might contact us, we will be glad to provide you further information including maps.

To save your wishlist please login.
login